God has revealed Himself to us as God the Father, God the Son and God the Holy Spirit. In the Old Testament, people thought that God was far from them, He was in heaven, and none could reach Him. Sometimes, people feared God and thought that He was mean. Nevertheless, they believeed that God was the creator of all things, they recognized Him as God the Father. In the mystery of redemption, through the Virgin Mary, God comes to us as a little child born in poverty. His mission was to reveal to humans that the God they thought was inaccessible is dwelling among them, and that the God they thought was mean is merciful and wants them to be merciful as He is. Unfortunately, humans will not be able to understand how God can be a little child, poor and vulnerable, they ended up crucifying Him, but He came again to life. After the Ascension, through His Spirit; He lives in us. Despite all our trespasses, God has come to dwell in us. That is the mystery we are celebrating today.

In those few lines, I hope to have shared with you what I heard from the homily from the 6:00 AM Mass on Sunday May 30, 2021 at Mont Sion Gikungu. The Mass was celebrated by Father Hérménegilde Coyitungiye. 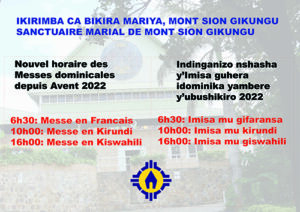