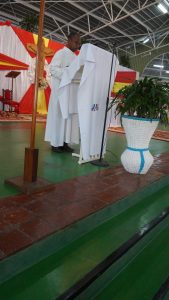 Today we celebrate the Most Holy Trinity, a mystery difficult to understand even for most learned theologians. There is an anecdote saying that once, Saint Augustine was walking along a river in meditation; he was trying to understand the mystery of the Most Holy Trinity. There, was a little kid who was fetching water from the river with a little container, the kid was pouring the fetched water into a small hole.

Saint Augustine asked the kid the goal of what the latter was doing. “I hope to pour all the water from this river into this small hole”, answered the kid. “You are not reasonable, it is not possible to put all the water of the river into that small hole”, said Saint Augustine. “You cannot understand the great mystery of the Most Holy Trinity with your small mind either”, replied the kid. 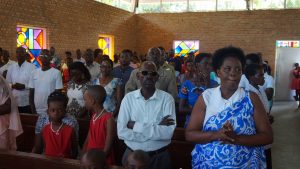 impossible; the mystery of the Most Holy Trinity is not something that our minds can comprehend. This is the reason why Saint Augustine said later that we should believe to understand and understand to believe.

We can understand the mystery of the Most Holy Trinity only by the grace of God. God the Father created us in His image, He sent His Son Jesus Christ to save us from sin, the Holy Spirit is the love between the Father and the Son, and by His power we share in the life of God.

In the first reading, the attitude of Moses when God appeared to him can serve as a lesson to us. The latter did not ask God a favour for his own sake, but he asked God to accompany the people of Israel. There is nothing better than to be accompanied by a merciful and gracious God, slow to anger and rich in kindness and fidelity. 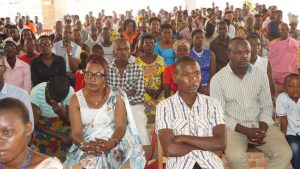 In the second reading, we are told to rejoice and to live in peace. The main thing that keeps us from living the peace of the Lord is our refusal to enter in the communion of the Most Holy Trinity. Indeed, if we believe that God created each one of us in His image, we will then treat each other with respect and love regardless of our differences. The fact that someone’s opinion is different from ours would not make us treat him with less respect.

In those few lines, I hope to have shared with you what I heard from the homily from the 6:30 AM Mass on June 7, 2020. It was celebrated by father Sebastian, formator in the major seminary, Saint Curé d’Ars of Bujumbura.